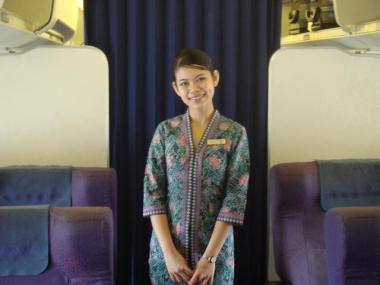 Before I get started on writing about all my adventures in Hong Kong and Kuala Lumpur, let me jump forward to the flight home so I can finish talking about my experience with Malaysia Airlines.

First, we had a 3 hour flight to Kuala Lumpur from Hong Kong. We were at the check-in desk when we engaged in the same process we had been through on the 2 flights on the way over. I even had to sign the release forms for a third time. However, on this leg of the journey, add a bit more frustration on the part of me and subtract a little bit of understanding on the part of the check-in staff.

Our conversation re: my allergies with the lady checking us in was interrupted by a lady who was more senior. She informed us that the plane was full and therefore they couldn’t have a peanut free plane. We couldn’t understand what the number of passengers had to do with peanuts. She repeated this fact quite a few times, which suggested to us that they were not even going to honour the 7 row ‘buffer zone’ referred to in their policy. And please note that it was the check-in staff that brought up the allergy with me in the first place as it is in the system (so it wasn’t like I was bringing the topic up with the wrong people, who didn’t know). I was fuming. My dad interjected, telling the staff that it would be fine and thus ending the discussion with the check-in staff; wanting to ensure that we didn’t miss out on our 3 days of shopping and sun-soaking in Kuala Lumpur by being denied the right to board the plane.

I was really worried, as the check-in staff had not instilled very much confidence in me. My dad, thankfully bringing a more level-headed approach, assured me that we would sort it out when we were on the plane. He said that the check-in counter clearly didn’t know their own policy and that the in-flight crew would be much more willing to help, given their job is to ensure the safety of passengers.

Instead of using up all my energy worrying about a situation that I had little control over, I flicked into lawyer mode and began thinking of all the arguments I was going to raise with them on-board in the event that they were going to serve the peanuts within the 7-row ‘buffer zone’. Obviously, as much as I would like to be able to, I couldn’t do anything about peanuts being served to the rest of the plane (given their policy does not agree to honour this). Well, except to beg, of course. The ‘buffer zone’, on the other hand, was their creation and formed part of the terms and conditions under which I booked my ticket with Malaysia Airlines. Tip of the day: bring a photo or screenshot of an airline’s policy onto the plane, in case you need to show it to the in-flight crew after take-off.

When we boarded the plane, we discussed the allergy with a flight attendant, who went back and forwards as to whether or not they would serve peanuts. It seemed that the poor guy was stuck between a rock and a hard place – us, the complaining passengers requesting no peanuts be served; and his supervisor, his boss telling him that peanuts would be served. Sorry Mr. Malaysia Airlines Flight Attendant Dude. Eventually, after enough toing and froing, they reached a middle ground.

But what Malaysia Airlines decided to do was, IMO, completely strange. They seemed very concerned about other passengers missing out on their peanut snack. So they decided that they would serve the peanut snacks to passengers as they exited the plane after landing. I was perfectly OK with this from an allergy perspective, but I just found it entirely bizarre. For a few reasons.

Firstly, and correct me if I am wrong, I don’t think that any passenger would feel SO hard done by for not receiving their pack of peanuts that they needed the snack on the way out (also keep in mind that we were landing at about 12.30am). The majority, if not all, passengers would completely understand and accept that they missed out on a snack because of a life-threatening allergy. I have missed out on plenty of food in my time (as well as things that are far more exciting than peanuts), and I have still lived an entirely fulfilling life to date. I guess you could say it was a nice gesture on the part of Malaysia Airlines to serve the passengers the snack they missed out on. But more strangely, by giving the peanut snack to passengers as they left the plane, it was reminding them that the snack wasn’t served (and therefore making passengers assume that the airline had forgotten to serve the peanuts at first). On our flight home from Kuala Lumpur, the seatbelt sign was on for about three-quarters of the 8-hour flight, which meant that no hot beverages were served. Would people have liked to enjoy a cup of tea or coffee? I’m sure. But did they even think twice about it once they left the plane? Highly unlikely. Did they judge the airline for it? Definitely not.

Finally, on the last leg of the journey, from Kuala Lumpur to Melbourne, the flight attendant was far less accommodating (at first) of my allergy, and seemed quite indignant that we were asking for no peanuts to be served. It was almost as if we hadn’t given the airline notice and were suddenly coming onto the plane making unsubstantiated demands. He continually quoted the words “it’s not fair on other passengers” if peanuts are not served. We very calmly and logically pleaded with him and explained that we have been on three other Malaysia Airlines flights in the past 2 weeks and on all they agreed to not serve peanuts. The flight attendant responded saying that every flight supervisor has a different approach, and so some may agree to not serve peanuts while others may not. We requested to speak to the supervisor ourselves, but luckily the flight attendant returned later advising us that the supervisor had agreed to our request.

The purpose of this shpiel is to make a few points.

Firstly, I, of course, appreciate the airline’s efforts and decisions to not serve peanuts on the plane. This is not part of their policy (though I do think it should be), so I appreciate that they took the extra measure for my safety and comfort.

Yet, as noted in my previous post, it is unfortunate that the airline doesn’t get the full extent of credit in relation to this accommodating decision, given that it caused me the stress and anxiety prior to boarding, when in reality, a simple change of policy would be an incentive for many allergy-sufferers to fly with Malaysia Airlines. It would also be nice for us Allergians to not have to argue over a potentially life-threatening situation every time we board a plane.

Secondly, I think it is important for check-in staff to know (and follow!!) the policy that is quoted on an airline’s website. Allergians have enough stress as it is; don’t throw a spanner into the works!

Thirdly, these experiences represent the main issue with the airline in its stance on allergies. Through my conversations with Malaysia Airlines, it seems that they are extremely concerned about passengers missing out, quoting numerous times that they cannot not serve peanuts as “it’s not fair on other passengers”. I don’t think that this is a good enough justification for serving peanuts. At all. Sure, adopting a consequentialist approach, the rights of one shouldn’t trump the rights of many. However, for passengers, this was a matter of a snack that lasted the entirety of about 2 minutes; whereas for me, this could be a life or death situation – I would think that this is a clear decision to make. Further, I personally think that it would be much less fair for passengers if they had to come to an emergency landing in the event that, heaven forbid, I went into anaphylactic shock [which, interestingly the flight attendant told me they have had to do before].

Finally, I don’t think that an airline can use fairness for passengers as an excuse for serving peanuts. If it is unfair for passengers to miss out on their snack then airlines should be prepared with a replacement snack when Allergians are on-board (and have given appropriate warning). It is the fault of the airline that passengers are missing out on snacks altogether, not on us Allergians.

I think that airlines need to be proactive. Rather than waiting until a passenger dies on a flight before they change their policy, airlines should ensure they are providing adequate protection to Allergians, without us having to argue for it. This would also give Allergians peace of mind and create an incentive for this section of the public (which is a vastly increasing one) to choose to fly with a particular airline.